“Flying ants or swarming termites?” is an expression used many times in commercials by pest control companies. Most people aren’t going to examine insects closely to determine whether they meet the standards as ants or termites, there are some distinctive differences between the two. Ants have crooked antennae, while the termite sports straight ones. One of the more prominent differences between the two is their bodies. Termites have straight waists that disguise the separation of parts, but ants have three distinctive body sections. The ants will have two eyes, one on each side of the head; Termites won’t have any and are completely blind. Flying termites have four wings that are all the same size, as the ant has two pairs of different sizes.

The termites that fly are those that reproduce. They look for a place to begin a new colony that is independent of the one they left. Similarly, ants that fly are mating insects which usually only live for a short time, especially the males.

Flying ants or swarming termites are both referred to as alates, which simply means that they are at the mature stage of their lives. Termites swarm when the existing colony has all the members that it needs. This can cause the population to become stressed.

Flying ants are a nuisance for a short time, while termites that fly become the real problem after they locate a place to begin their families. The stress for you comes when they establish a home within yours. When you identify flying termites, contact your local pest control company to evaluate if they are leaving your domain or coming into it so proper protective and extermination measures can be promptly taken.

Food Sources for Termites and Ants

Termites recycle waste by consuming waste such as dead wood, feces, and plants.There are two groups of termites: higher termites and lower termites. The higher termites consumer a different variety of materials, feces, humus, grass, and leaves. As the lower termites consume mostly on wood, it can be difficult to digest; They prefer to consume fungus-infected wood which is easier to digest that has more protein. While termites eat only specific material, ants eat just about anything. There are many different ant species; Most love sweets, while other ants like fungus. Food is a necessity to ants that requires a diet of proteins, carbs, and lipids.

Where Termites and Ants Nest 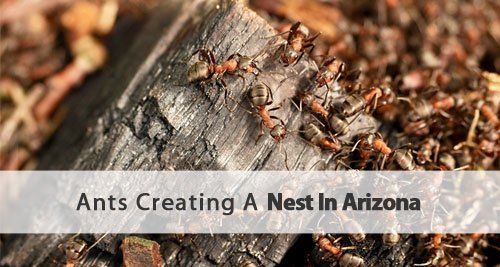 There are three types of termites: drywood, dampwood, and subterranean. Drywood termites are the most destructive to homes as some like to spend the rest of their lives inside of dry wood. As these termites have wings they like to be in higher places of the home or building. You can find these type of termites in south-western states. Dampwood termites craves for wet or decaying wood. These type of termites aim for older homes with unseen damage to the home. You’ll see dampwood termites along the west coast. Subterranean termites come in colonies of millions that are known for how quickly they can consume wood. They’ll eat anything that consists of cellulose fibers and any type of wood. The subterranean termites can be found all throughout the U.S. but more commonly in the southern half.

Ants of all varieties make their homes in many different places. In the arid desert, we find ants nesting in mounds of sand, and other desert vegetation. Some ant colonies can also be found is damp or rotting wood. If you have an ant problem, you will probably find that the invaders all live in one central colony or a few colonies. Locating the colony can be tricky which is why many people elect to hire a professional termite or pest control company. Is Termite Activity Seasonal? The environment in Phoenix, Arizona, is ideal for subterranean termites. These termites require with plenty of […]

Read the rest of (Infographic) Termites: The Perfect Weather Conditions for Termite Infestation

3 Home Visitors Nobody Invites Over We often lump all termites into one classification, but there are different varieties that make up the formidable armies. Drywood […]

Read the rest of 3 Home Visitors Nobody Invites Over

What Species of Termite is in Your Home? It is estimated that there are more than 2,300 species of termites in the world. This might not be completely […]

Read the rest of What Species of Termite is in Your Home?

Four Most Common Termites in Arizona In order to formulate the most effective means of getting rid of termites, identifying the type of critter infesting in […]

Read the rest of Four Most Common Termites in Arizona

What Is The Most Destructive Termite In Mesa, AZ?

There are 4 main types of destructive termites that termite companies must treat for in Mesa, AZ.  They are Desert […]

Read the rest of What Is The Most Destructive Termite In Mesa, AZ?

PHOENIX TERMITE EXTERMINATORS. FREE PHOENIX TERMITE INSPECTION Treating Both Drywood and Subterranean Termites in Phoenix When it comes to termites […] Wood is the most common structural element for two reasons primarily. It is available almost anywhere in the world, and […]

Read the rest of Wood and Termites – A Long Term Relationship

Nasutiform Termites – a New Resident in the United States As if there weren’t enough species of termites in the U.S. already, a new kind was introduced at the beginning […]