Scorpions are dangerous creatures in Arizona and around the world. Their stings are incredibly painful. For pets, the elderly, children, and those who are allergic to scorpion venom, a scorpion sting could potentially be dangerous or even deadly. Scorpion control is very important and should be administered immediately after finding a scorpion of any type or size in your home. Scorpion home sealing is also an option as well and can prevent additional scorpions from getting within the walls of your home and infesting the building. But what exactly are scorpions, what makes them so dangerous, and what types of scorpions should a homeowner look out for? Read on to educate yourself about scorpions and how to deal with them safely. 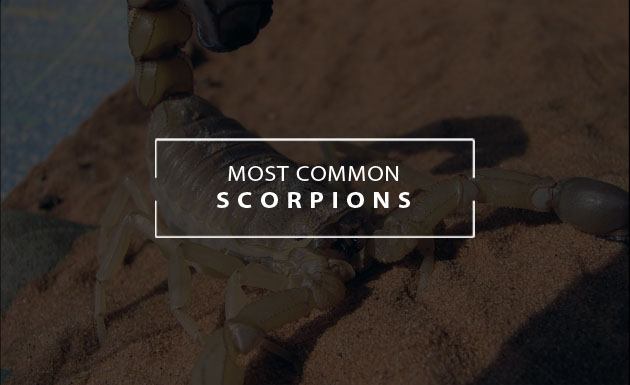 What is a scorpion?

The scorpion is a predatory arachnid (that’s right– the same class as spiders) of the order Scorpiones. Scorpions have eight legs, a pair of grasping appendages (pincers), and a long, curled tailed that ends in a venomous stinger. Scorpions can vary widely from a tiny nine millimeters to nearly nine inches. Scorpions are a relatively archaic and ancient type of animal that remains to this day. There are nearly 1750 species of scorpions around the world that can be found on nearly every continent.

Scorpions stings a exceptionally painful, but in most cases cause little harm to humans. Treatment for a scorpion sting is usually not needed. However, while healthy adults are usually safe, children and elderly adults are at a higher risk for complications from an untreated scorpion sting. In the United States, Arizona included, most of the species of scorpion that reside here are not poisonous enough for healthy people to be considered dangerous, but species of scorpions from other places can in fact be deadly. Regardless, scorpion control and scorpion home sealing should still be considered wherever you may live if you begin to find scorpions in your home.

Before you can treat your home to prevent or exterminate scorpions, it is helpful to know exactly what type of scorpion is invading your home.

The Striped-Tailed Wood scorpion is another Arizona native scorpion that is also known as the Arizona Devil or Wood Scorpion. These scorpions are fairly large, and can be two inches in length or even larger. The Striped-Tailed Wood Scorpion pesters residents in Arizona, New Mexico, Mexico, and California. They are recognizable by their dark brownish tan color and noticeably thicker and bulkier bodies.

Should I try exterminating scorpions in my home on my own?

There are several reasons why you should leave the exterminating to the professionals. Most of all, scorpions can be potentially dangerous foes to fight on your own. Attempting to take care of the problem yourself will often not work out, leaving scorpions more time to infest your home and potentially harm any pets, children, or elderly family you may have living inside your home. Just as well, professional exterminators like the pest control specialists at Varsity Termite and Pest Control have the expertise, experience, tools, and products to properly get rid of a scorpion infestation and prevent further intruders from getting into your home.

Who can help me with my scorpion problem in my Arizona home? If you need excellent Gilbert pest control of any kind, including scorpion control in Gilbert, Varsity Termite and Pest Control is the place to go. Family owned and operated for over twenty years, Varsity Termite and Pest Control has a team of talented, trained, and expert exterminators that offer scorpion control and scorpion home sealing services to protect your family and pets from the dangers of scorpion infestation. Give us a call today to learn more about our services and how we can help you keep your home pest free for good. Death stalker is considered the deadliest scorpion in the world, hence the name. Its home is North Africa and the […]

Read the rest of The Three “Baddest” Scorpions Alive

Be In The Know! Here Are A Few Important Facts About Arizona Scorpions Ideally, you never get to see one, but if you live in Mesa, AZ, chances are that sooner or later […]

Read the rest of Be In The Know! Here Are A Few Important Facts About Arizona Scorpions Here is a continued look into the most common insect pests in Gilbert, Arizona. You may have encountered these pests […]

Why is Phoenix Considered the Scorpion Sting Capital? There is a reason why Phoenix is referred to as the scorpion sting capital: more than 45 species of scorpions […]

Read the rest of Why is Phoenix Considered the Scorpion Sting Capital? If you lived areas of Arizona for a long time, you might know the pain associated with a scorpion sting! […]

What Comprises the Scorpion’s Body? The body of the scorpion is comprised of the cephalothorax, where the head is located, and the abdomen. The head […]

Read the rest of What Comprises the Scorpion’s Body?

Four Most Common Termites in Arizona In order to formulate the most effective means of getting rid of termites, identifying the type of critter infesting in […]

Read the rest of Four Most Common Termites in Arizona